You are here: Home / Mark's Farm Tips / Weeding Out The Blackberries

As small holdings become less commercially viable, little or nothing is spent on them. As a result, weeds move in. Many of our customers are attracted to these types of blocks, although their rundown condition is reflected in their value, the block is purchased more for its rural ambience, rather than carrying capacity. A really positive aspect of hobby farmers taking up the deed is the impetus, imperative and enthusiasm they bring to mitigating the effects of vermin and invasive weeds.

Blackberries are an obvious and very invasive weed that grows abundantly in most hobby farmer hotspots. In fact, it is estimated they infest over 8 million hectares, choking waterways and degrading agricultural land. They also strangle the understorey of some of our most valuable remnant bush in high rainfall zones. They are a well known for coexisting almost symbiotically with some of our most maligned vermin, such as foxes, rabbits and starlings.

Controlling blackberries is hard work, particularly where tractor access is difficult, like creeks and gullies. But, when found along fences and in isolated clumps, they are fair game for some good, old fashioned mechanised mayhem. Many of our customers investigate a SOTA Kubota and 4-in-1 loader with taking on blackberries high on the hit list.

Winter is a great time to get stuck in to them. Because they become dormant in the winter, they won’t come back too ferociously – at least till it warms up a bit. This gives you time to plan an integrated approach to eradicate the thickets. Blackberries have an interesting biology. The canes have a biennial growth cycle, where in the first year they sprout from seed or the perennial root system. Eventually, the canes tip over and touch the ground. From here a new cane will sprout the next season. This is why they are so invasive and difficult to control. The eradication of an established thicket may take several years as they reshoot from clumps of roots.

Approach the thicket tentatively first. Be wary of concealed agricultural flotsam and other abandoned iron detritus that might entangle or spear a tyre. The best plan would be to scalp the soil surface with the bucket to try and remove as much of the canes and roots as you can. The jaw action of the 4-in-1 bucket is ideal for grasping the spiny stems and pulling out the large, established root clumps with it. This works a treat, particularly in hard to get places.

The next step would be to unearth as many of the root clumps as you can. This is known as grubbing. Our AGMAX box scraper is a perfect candidate for the task. The rippers are well designed to bring the deeper, more entrenched roots to the surface. Pile the roots up to dry and later, burn. It is inevitable that, come spring, you will encounter vigourous regrowth. A good tip is to throw some fast growing winter ryegrass on the disturbed site without fertiliser. The pasture will be established by the time the blackberries are ready to shoot and should compete well for sunlight and nutrients, impeding seedlings and further weakening remaining root clumps.

Now that the thicket is more manageable, you can keep it under control with regular mowing/slashing to weaken the remaining root clumps and prevent seeding.

Herbicides can be part of your integrated approach, but shouldn’t be applied in the same growing season as mechanical control. Applying herbicides too soon in the growing season can lead to ineffective and/or inconsistent results. The most effective strategy following removal is to allow regrowth to about 500mm before herbicide treatment. This also allows biological controls like fungal rust to infect the vulnerable new shoots. High volume spot spraying is preferable. Be aware of your proximity to waterways and sensitive flora, particularly if you are using a penetrant or surfactant in combination. My preference is for metsulfuron herbicides. It is slow to act, but if you adhere to the label, most reliable. I’ve always had good results without adding penetrants. Metsulfuron tends not to harm pastures, but clovers and annual ryegrass are susceptible.

In the season after treatment, you with notice minimal growth, but because of its biennial growth cycle, will come back hard in the second year. Don’t be tempted to remove the poisoned canes, leave them on. Metsulfuron is active in the stems and soil for a relatively long time, so let it translocate to the roots.

CAUTION: Always refer to the manufacturer’s label for correct usage and application rates. The label will bring to your attention other constraints to usage, like applying herbicide to stressed plants. Don’t apply herbicide when fruits are mature. There is every chance of birds, animals and humans feasting on the berries. Also, while the plant is flowering, remain mindful of our little honey making mates, too. 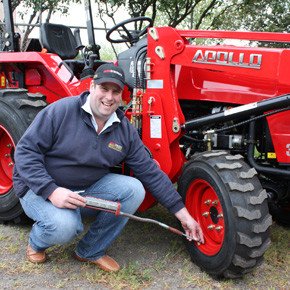 …I visited several machinery places in Western Australia and felt that they didn’t take me seriously. It’s a bit blokey here. Well, it’s SOTA’s gain and their loss. Thanks a million, Sota!”