The 18th Variety Bash 2008 started at 10.00am on August 14th from Moonee Valley Racecourse. A very chilly morning with hot sausages and coffee all round, the Variety Bashers were primed and ready to commence their journey, many of them (and their cars) in thematic and outrageous costumes.

This year’s Bash travelled for 10 days from Victoria through central New South Wales to a final destination of Yeppoon in Queensland, raising money from Bash participants, sponsors and events to donate to Variety Children’s Charity. The Charity is dedicated to transforming the lives of children with special needs by providing opportunites to increase their quality of life and fulfil their potential.

SOTA Tractors sponsored a car for Thomastown’s Trans Gears & Diffs whose drivers – Kevin “Big Rev Kev” and Kane – put in a tremendous effort to participate; building and adorning their car, raising the money for entry to the Bash and making a difference to children with special needs through their own fundraising efforts for Variety. The boot of the car was filled with lollies and giveaways for children on the Bash route – children often have the day off school to attend the parade of cars and join in the camaraderie of the Bashgoers.

Kevin was thrilled to be participating in the Bash. “It’s fantastic, we’ve waited for it all year, and we’re really looking forward to it, to catch up with old friends and raise some money along the way. And thanks to our sponsors, we’ve been able to make it, especially SOTA Tractors who came on board and helped us make it over the line.”

The diversity of costumes and vehicle decoration was amazing to see and the different types of people involved covered a good cross section of Melbourne. I enjoyed hobnobbing with Highway Patrol Sheriffs (who had US police badges, donation receipts in the form of parking fines and bullethole labels on their Highway Patrol car) through to hippie girls in their well painted combi-van-70s-style car. Mickey Mouse and his wife were excited participants, as were the ethnic taxi drivers and Muslims. A corporate high flyer whom everyone called “Emu” dressed in pink and bounced a pink footy through the crowd. I saw Batman getting his nose wiped by his old lady!

Interestingly themed cars included the Looney Tunes car, Thirst-Aid (vintage Coca Cola style), the car with the shark on the roof, the camouflage car, the ice-cream-van-themed car, sheep, teddy bear and Ronald McDonald roof combinations, the air-brushed children’s cartoon themed car, Stargazer and many more. Most cars were outfitted inside as well as out – and many were well stocked with party food for the road.

Hailed as a once-in-a-lifetime road trip, it’s obvious that the great community spirit invoked through preparation and participation in the Bash is to be admired and enjoyed. The Bashers were aglow with good cheer and the opening Bash speech was quite amusing and inspirational (quote – “We will not be rampaging and pillaging through the countryside…we will conduct the Bash with dignity and respect for the communities we visit”). A number of celebrities such as Merv Hughes, Lisa Edwards, Rod Collins and Shane Warne participated in the Bash and donated their talents to the cause.

With 115 cars and 350 people travelling in the Victorian Variety Bash convey, it is expected that $1.2 – $1.5 million will be raised in 2008 and $19 million raised annually by Bashers in Australia. SOTA Tractor’s sponsored car is also hoping to attend the 4th Variety Brat’s Bash in 2009, which gives supporters the opportunity to share the Bash experience with family and friends while travelling to remote and beautiful places.

For more information about the Variety Bash, visit www.varietyvic.org.au 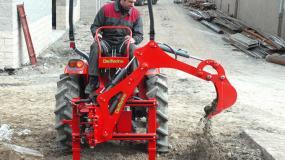 EDITORIAL - Blues Magazine.  The new Del Morino RES 15 backhoe has all the typical uses of a backhoe - but with the size to work in really small areas. Found all sorts of reasons for putting off building a water feature on your block? SOTA Tractors has just taken away the biggest one: not having the … END_OF_DOCUMENT_TOKEN_TO_BE_REPLACED

“My tractor, an APOLLO 354 has been fantastic…

…a real workhorse. If you need technical advice, the service department are willing to talk you through the process over the phone. They treat all of your questions with respect and thus there is no such thing as a dumb question. It’s great to know that SOTA is just a phone call away and that they will go that extra step to help you.”